Sense and Sensibility
by Kate Hamill
Adapted from the Novel by Jane Austen
March 9th-12th, 2017

Elinor, this eldest daughter, whose advice was so effectual, possessed a strength of understanding, and coolness of judgment, which qualified her, though only nineteen, to be the counsellor of her mother, and enabled her frequently to counteract, to the advantage of them all, that eagerness of mind in Mrs. Dashwood which must generally have led to imprudence. She had an excellent heart;- her disposition was affectionate, and her feelings were strong; but she knew how to govern them: it was a knowledge which her mother had yet to learn; and which one of her sisters had resolved never to be taught.

Marianne's abilities were, in many respects, quite equal to Elinor's. She was sensible and clever; but eager in everything: her sorrows, her joys, could have no moderation. She was generous, amiable, interesting: she was everything but prudent. The resemblance between her and her mother was strikingly great.

--from Chapter 1 of Sense and Sensibility by Jane Austen

Meet the Dashwood sisters: Elinor is calm, rational, and reserved. Marianne is animated, emotional, and passionate. Yet both sisters are equally subject to the travails of love in Sense and Sensibility, Kate Hamill's high spirited, hilarious adaptation of the classic 1811 novel by Jane Austen. 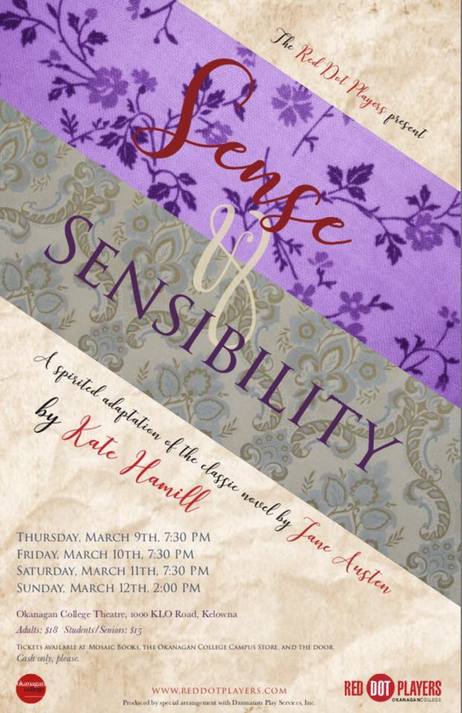 Originally from the farms and fields of upstate New York, Kate is a NYC-based actor/playwright.

In 2014, her adaptation of SENSE AND SENSIBILITY (in which she originated the role of Marianne) premiered off-Broadway with Bedlam, directed by Eric Tucker. SENSE AND SENSIBILITY was named "Top Ten Theater of 2014" by both Ben Brantley of the NY Times, and by the Huffington Post, which called it “the greatest stage adaptation of this novel in history.” SENSE AND SENSIBILITY was remounted off-Broadway in Jan 2016; Kate reprised her role. The remount was extended 4 times, running 265+ performances. It was nominated for BEST REVIVAL by the Drama League, 2 Lortels, and won the Off-Bway Alliance Award for BEST UNIQUE THEATRICAL EXPERIENCE.

S&S had its regional debut at Dallas Theater Center in April 2015 (director Sarah Rasmussen). It is published by DPS, and opened the 2016/2017 seasons at both the Guthrie Theater and Folger Theater.

IN THE MINES was a 2015 Sundance Theater Lab semi-finalist and selected for Theater Latte Da's NEXT festival; THE LITTLE FELLOW was a 2016 O'Neill semi-finalist. SENSE AND SENSIBILITY was selected to kick off Hudson Valley Shakespeare Festival’s first-ever HVSF2 series by Artistic Director Davis McCallum; VANITY FAIR and PRIDE & PREJUDICE were part of the 2015/2016 HVSF2 series. EMMA (a play about Emma Goldman) was a finalist for the Red Bull Theater New Plays Festival, and THE LITTLE FELLOW was selected as part of Phoenix Theatre Ensemble’s 2014 First Stories Festival. Kate is a member of Oscar-nominee Jose Rivera's writing/development group.
Red Dot Players bring Sense and Sensibility to OC
Okanagan College Public AffairsJane Austen is coming to Okanagan College in March, via the College’s very own theatre troupe – the Red Dot Players – who are staging a popular new adaption of one of the author’s best known works.
Featuring a cast of veteran players and newcomers, and under the direction of OC English Professor Jeremy Beaulne, the curtain will rise on Sense and Sensibility for a four-night run from March 9-12 in the Lecture Theatre at the Kelowna campus.

The play follows the Dashwood Sisters, Elinor (played by Amy Williams) and Marianne (played by Zoë Sommerfeld), as they navigate travails of the head and the heart in Victorian era England.
Audience members can expect a fun and fast-paced look at Austen’s classic 1811 novel, thanks to a spirited new script by playwright Kate Hamill which has already been produced to acclaim on some of the world’s leading stages since it was published in early 2016.
“This adaptation really amplifies the humour of Austen’s novel while preserving the complex relationships and social spheres within,” says Beaulne. “It lends an almost Monty Python-esque element of comedy to the story in places, while still conveying the serious struggles of two young women searching for autonomy and independence.”
The production marks Beaulne’s sixth time in the director’s chair for the Red Dot Players. He is also no stranger to the source material.
“I love Jane Austen and have taught her works in a number of courses,” explains Beaulne. “Whether you are familiar with Sense and Sensibility or completely new to the novel, I think there is something for everyone in this adaptation.”

According to the director, one of the factors that makes the play a challenge to stage is one of the reasons it continues to excite audiences.
“There are more scene changes in this play – upwards of 20 – than any other I’ve ever directed,” says Beaulne. “It’s a whirlwind from start to finish. The cast and crew have worked incredibly hard and are ready to share that wonderful energy with audiences.”
Ticketholders will be treated to sweeping hand painted vistas by local artist and OC employee Marie Bartlett. A series of immense canvases set the stage for the action and are intended to transport the audience to the English countryside. Actors will be outfitted in beautiful period costumes sewn by Christine Caumartin and OC employee Karen Tessier.
The Red Dot Players troupe was formed in 2010 and have produced six plays leading up to Sense and Sensibility: The Beaux' Stratagem (2011), Blithe Spirit (2012), Les Belles-Soeurs (2013), The Government Inspector (2014), The Black Bonspiel of Wullie MacCrimmon (2015), and A.K.A. Fangirl (2016). The troupe provides students and employees with an opportunity to contribute to the Okanagan’s bustling creative arts scene.

Tickets are available at Mosaic Books, the Okanagan College campus store and will also be available at the door ($18 for adults and $15 for students/seniors). Learn more on the Red Dot Players website www.reddotplayers.com/. 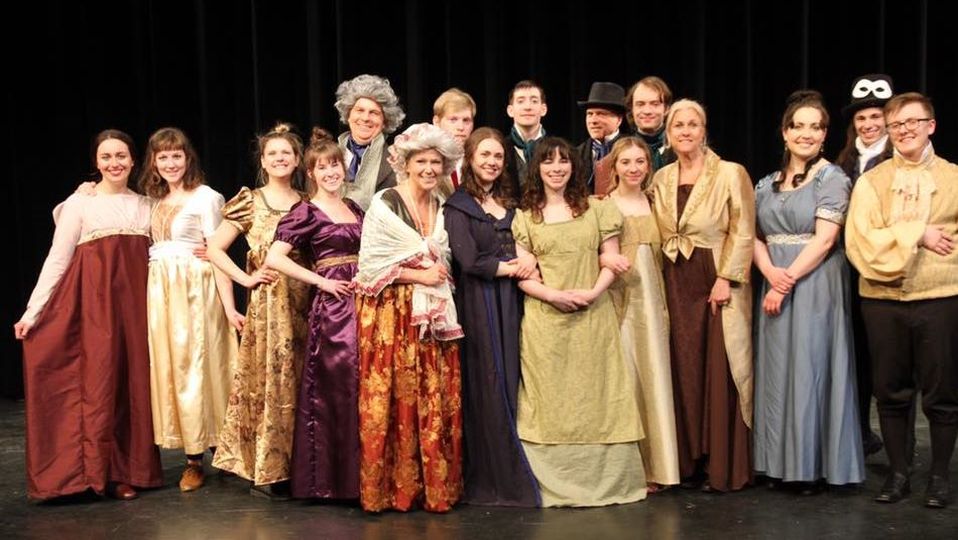 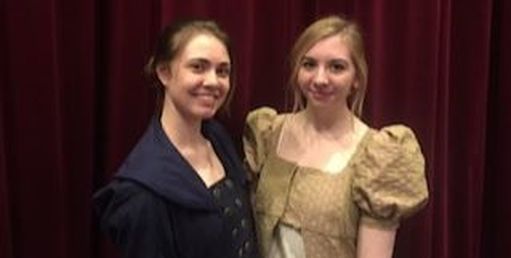