GIL: Look—we both know that letting someone like that wander around the compound is crazy! We both know that Mr. Weiss isn’t exactly a poster child for rational thinking. The man just held a charity art auction within spitting distance of the Arctic Circle, for God’s sake! But it’s not our job to ask questions or make suggestions. We are cogs in a machine, and that is perfectly fine with me! [Beat.] I have decided to embrace my cog-dom! And you should too!

For Gil Stubbs and Lyle Hamilton, the security technicians responsible for monitoring the CCTV cameras at the top secret Weiss Diamonds compound in the Northwest Territories, Canada, one day blurs into the next. The monotony of their job comes to an abrupt end, however, with the arrival of two strangers—a new security technician called Rosamund Wood and a famous English secret agent. Suddenly, Gil and Lyle find themselves caught up in a game of international espionage—and the fate of the world hangs in the balance!

The Red Dot Players present Special Guest, a spy comedy, starring Peter Church as Gil Stubbs, Sarah Foss as Rosamund Wood, Torsten Nogel as Lyle Hamilton, Sandy MacKay as Vitriola Lupino, Matt Gunn as Conrad Weiss, Jason Woodford as Special Guest, and DeAnna MacArthur as the narrator. Sound mixing and post production by Mike Minions. Written and directed by Jeremy Beaulne.
​
To download Special Guest, subscribe to the podcast The Red Dot Players Present, which is available from Apple Podcasts, Stitcher, Downcast, PodBean, and several other podcast services. You can also listen to Special Guest on the player below.

​This production contains language and thematic elements that may not be appropriate for younger audiences. ​ 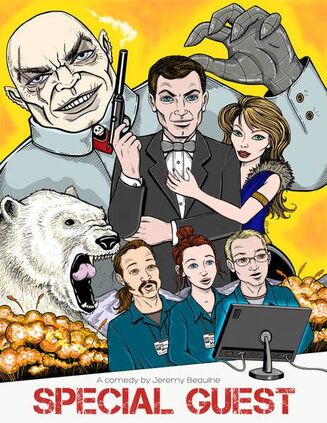